What are stars? What happens inside a computer? And how are films made? These are the big questions that will be asked (and answered) in Byd Tad-cu, a new series on Cyw, the Service for S4C’s youngest viewers which starts on 3 September.

The series is a co-production with Channel 5 (the English version titles The World According to Grandpa), and base don Chris Heath’s books of the same title.

Each episode starts with a question posed by one of the grandchildren to their Tad-cu, or Grandpa (who is played by actor Danny Grehan). His answer is always completely imaginative, impossible and intriguing and is brought to life by puppetry and animation. Hati, the talking rabbit puppet, completes each story with a true version of the fanciful tale.

The series received a contribution from the British Film Industry’s Young Audiences Content Fund (YAC Fund), a government backed pilot with the aim of making creative and inspirational projects for children and young people.

“It has been great to work with Channel 5 and the YAC Fund which has allowed us to develop even more ambitious content for our younger viewers. Grandpa’s World is a production full of fun, energy and imagination, which is sure to enchant.

The series was filmed under the challenging conditions of the Lockdown at the beginning of the year, and it’s a real pleasure to see talented young actors, most of whom are new faces to the screen.”

The series was filmed during the tight lockdown restrictions at the start of the year, following an appeal online and on Facebook inviting children to apply for cast roles. Due to the conditions at the time, all screen tests and exercises were conducted online.

The experience of appearing in front of the camera was completely new to many of the young actors:

“This is the first thing I’ve acted in” says Santiago Ciaran from Cardiff, who is a pupil at Ysgol Gynradd Gymraeg Hamadryad, Cardiff. “I have really enjoyed meeting everyone and seeing how things work behind the scenes. I’d love to get into acting again!”

“It was a dream come true to work on this series; the Process was quite different because of Covid, but I was glad to have something to look forward to, and to get to be face to face with people” said Owen Jac Roberts, who is a pupil at Ysgol Penglais, Aberystwyth.

Ysgol Bro Morgannwg pupil Seren Bowen said “It was an amazing experience, which I enjoyed so much.”

Gwen Nefydd from Ysgol Plascoch, Wrexham had only performed on stage with local drama clubs previously. “It was such an exciting experience to go down to Cardiff to work on the series, and I was pretty nervous before going. My Mum helped me to learn the lines. I enjoyed seeing how the green screen worked, and loved making new friends. I lost my Grandfather back in August last year, so it was a nodd experience working with the ‘Grandfather’ on the programme. I’m sure my Grandfather would have been proud of me.”

Performing on stage was also more familiar to Elen Dafydd Roberts, who is a pupil at Ysgol Treganna, Cardiff, and had won several competitions in this year’s Eisteddfod-T. “It was a great experience to learn the script beforehand” says Elen. “And I enjoyed seeing how things worked behind the scenes – for example, tennis balls were hun from the ceiling to show us where we needed to look. I’d love to present on TV when I’m older.”

The experience was also valuable to Loti Mai Delve, who is a pupil at Ysgol Gymraeg Bro Morgannwg, Barry: “I really enjoyed arriving at the set every morning and getting my make-up and hair done. I loved acting with Hati (the rabbit puppet) and enjoyed filming the Parrot episode where I danced the cha cha cha! 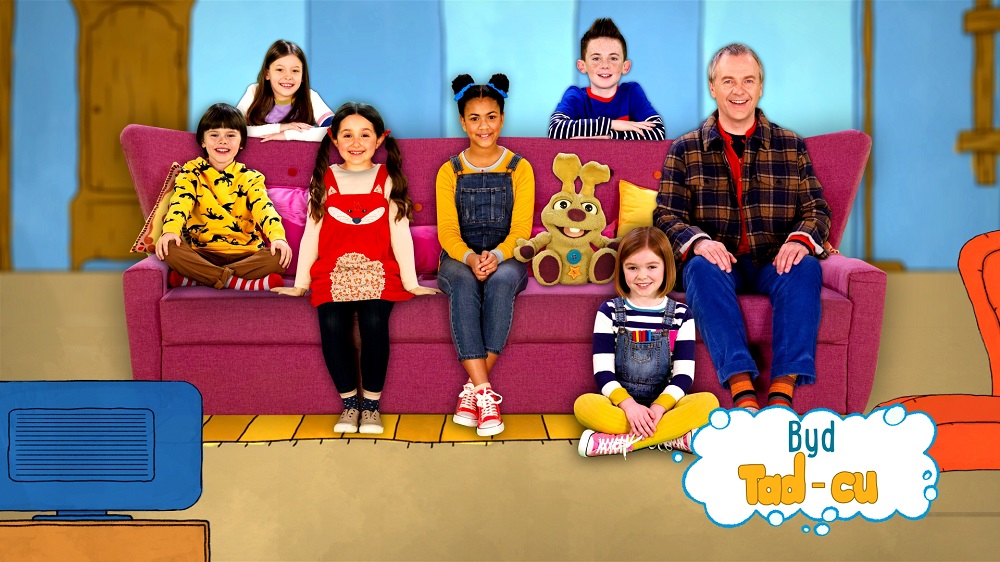 Every Friday on Cyw

On demand: S4C Clic, iPlayer and other platforms